For the closing ceremony of the festival on August 11, 2007 on Piazza Grande in Locarno, Switzerland, we will screen the latest production of Lech Kowalski : 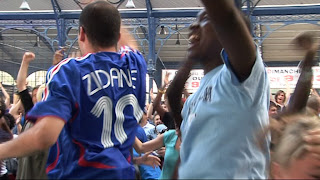 The 2006 world cup football final made infamous by Zidane’s head butt to Materazzi presented a perfect opportunity for a unique film.
We hear the French and the Italian announcers but never see football players or action on the field. Instead we follow the action by watching French and Italian spectators watching the game. We are with them in Paris and Rome, in their homes, in cafes or in Stadiums.
They are the main characters.
They represent the two teams and are as important as the unseen stars on the field.
Each person watching the finale was, at least for the duration of the game, deeply nationalistic. Eyes gaze in anticipation. Every tic, every reaction reveals hope and dread. But the people we are watching are more than spectators. We are observing people being themselves. They are mirrors. We are watching ourselves. The film is about people as much as it is about football.
Today we know that Italy beat France but the people in Winners and Losers will live forever, waiting to the very last seconds of the game, hoping their side will win.
When the screen fades toblack, something stays with us,
something more profound than a football score.
Publié par Lech Kowalski (www.lechkowalski.com) à 2:33 PM Aucun commentaire: