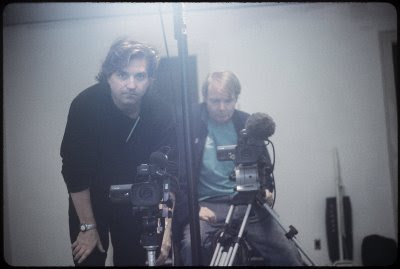 Little-known in France, where East of Paradise was discovered at the International Festival of Documentary in Marseille (FID Marseille) 2006, Lech Kowalski is a star of American underground cinema. “All my films, he says, were shot to create a space for me in the world. I wasn’t finding my place and cinema helped build my reality, forge a world that corresponded to me.” In fact, few contemporary bodies of work like Kowalski’s give such a strong impression of vital necessity, of body and soul commitment in a world that he is not content to visit and film but into which he throws, searches and finds himself. World of outskirts and the subterranean of the West, for a long time the ones of the Lower East Side in New York where Lech Kowalski, born in London to Polish parents, settles in the early seventies. Going with the Sex Pistols on their cataclysmic Unites States tour (D.O.A, 1981), accompanying the suicidal drifting of a junky (Gringo, 1984), or the survival struggle of the New York homeless (Rock Soup, 1991), Lech Kowalski celebrated the end of a generation, of an era and energy: the one of punk, last battle and swan’s song of rebellion, of a lifestyle that paid with the price of self destruction its desperate desire for freedom in regard to all authorities.
Last part of a trilogy through which Kowalski comes back to his Polish roots, East of Paradise is to this day the central piece of his work, an attempt to make account of a life committed to this world, to this era, and weigh its meaning and its inheritance. This meaning, Kowalski builds by articulating two movements whose bringing together had, for some, incited the same stupid indignation than that, dared by Duras and Resnais in their time, of Hiroshima’s destruction and the intimate drama of a young French woman. First movement: the filmmaker’s mother tells her son for the first time the great sufferings during her deportation by the soviets during the Second World War. Second movement: Kowalski tells his life as filmmaker in a New York of drugs, porn and punk, over an edit of fragments and never used rushes from his films. The mothers monologue counts, with those of Shoah, A Dirty Story, or the recent Fengming: A Chinese Memoir by Wang Bing, among the most poignant oral accounts in the history of cinema. Kowalski’s standpoint is opposite to the rigorous austerity of the previous films. His cinema is free of rules, systems, or moderations, he has no fear to cut up, to dramatize the account by framing his mothers face tighter and tighter, up to the mime, in the broken down empty apartment chosen as back drop, of such detail of past events: blackness to recall the obscurity in the train of the deportation, back to image when light enters back the freight car. Distance, propriety, all the common meeting grounds of the so-called ethics of documentary are swept by the empathetic commitment of the filmmaker in the here and now of the filming. The account overwhelms his mother who is stunned by the strength of the images her speech uncovered. Kowalski takes over, starts in the first person the story of his life, his mothers face in tears giving frame to the daily gestures of a junkie preparing his morning shoot accompanied by a casual jazz. If bringing together big history and the little story, the mothers prestigious and universal drama and the son’s drifting in the subterranean of sex, drugs and rock was a shock to some, it’s because Kowalski took care not to justify it straightaway, to let wide open the split of the times and events. Terrific audaciousness, gripping spectator experience: the split fills itself, the archives of the lost generation progressively charge with a painful solemnity, until appear under the faces of New York’s “victims and heroes” those of the Polish deportees. History lesson, act of memory, self-portrait, musical poem, libertarian manifesto, requiem: East of Paradise opens wide the window of documentary.