BORN TO LOSE will be part of a special program called "pourvu qu'on ait l'ivresse" at ENTREVUES FILM FESTIVAL in Belfort France, on Nov 25th 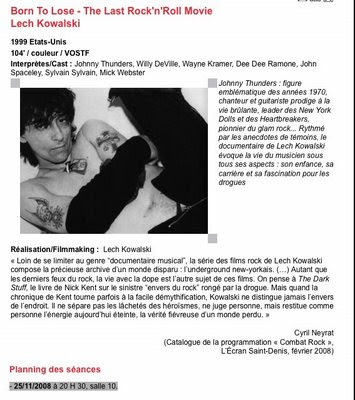 EntreVues has imposed itself since more than twenty years as the festival of ambitious cinema, combining a first films competition, theme-based retrospectives and tributes. It is also a privileged meeting place for audiences and directors and other professionals of young cinema.

There will be an After party at "la Poudrière" the same day : November 25th where Unfinished will be screened..

CAMERAWAR.TV will be presented at CINEMA NUMERIQUE II at Beaubourg, in Paris, France, on November 15,2008 at 16 PM programing organised by les Cahiers du cinéma and le Festival d'Automne. 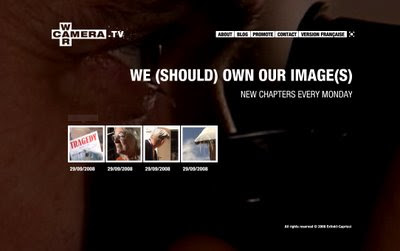 Questioning cinema and the film business and its ability to reach and communicate with audiences, the American undergrounds answer to Werner Herzog, cult figure Lech Kowalski has turned to the internet. Renowned for his controversial award winning documentaries, a journalist once called Kowalski a warrior battling with a camera to redefine the art of documentary. Kowalski has now taken his battle online with www.camerawar.tv.
Launched on September 29th, camerawar.tv is a new kind of documentary where Kowalski will post a new film chapter each Monday for a year. Every chapter is a short documentary in and of itself. When viewed together, whether chronologically or in arbitrary sequences, the chapters tell a story. They can be viewed in any order and express a new cinematic narrative. This is a new kind of cinema in a new venue. A cinema free of television and corporate production restraints, through which Kowalski seeks to rip away the walls between audiences and artists. Blogging about each chapter, the audience can interact with the director with comments or by submitting films and music of their own.